Handicare has been providing lifting solutions to help make everyday life easier for those with physical challenges for over 130 years.

Handicare Stairlifts goes back to the 19th century. One of the company's founders, Mr Jan Hamer, started his own business in 1886 selling lifts and other items. In 1889, Mr Mulder became a partner and the company name was changed to Jan Hamer & Co. The business grew rapidly into the biggest Dutch manufacturer of lifts.

Proposals for the first seated stairlift were made just 75 years after the formation of Liftenfabriek Jan Hamer & Co. Mr Mulder's grandson first encountered this product in America in 1960. He was so impressed with the idea that he decided to develop a stairlift for the Dutch market. The first ever European stairlift followed in 1962.

In 1889, Mr Brinkman founded an engineering company for the dairy industry. In 1920, the company developed a special kind of lift, the column lift, for customers who had difficulty lifting goods vertically.

Both companies were taken over by Otis in the 1980s. They merged to form Liftenfabriek Brinkman Jan Hamer. This Otis subsidiary began to specialise more and more in stairlifts.

In 1996, the company became independent once more and was renamed Freelift B.V. in 1997. Freelift focused entirely on the design and manufacture of stairlifts.

The first Minivator stairlift was developed by Dunstable Toolmakers in the UK in the 1970s. A few years later the design was purchased by Sunrise Medical. In 2000 a management buy out resulted in the creation of Minivator Limited as Sunrise sold off its stairfit range. With stairlifts as their core product the range was able to benefit for focussed research and development and increased investment.

In 1986 three wheelchair users, all suffering from a Paralysing injury met, by chance at a Norwegian rehabilitation centre. They had a shared vision to develop high quality, customer made wheelchairs. Their experience and dissatisfaction with the wheelchairs that were currently available to them spurred them on and, with a garage as their work shop, they set up a company a called ‘Rullstolekspertene’ or in English, ‘The Wheelchair Experts’.

Since its start in 1986, they developed the business both organically and through acquisitions and mergers; changing their name to Handicare in the 90’s to reflect the range of solutions.

Freelift became part of Handicare at the end of 2007 and the Minivator Group was taken over by Handicare in 2010.

On 1 July 2010, the merger of Minivator and Freelift resulted in the new company name, Handicare Accessibility Limited in the UK and Handicare Stairlifts B.V. in the Netherlands.

Handicare has agreed a two-year sponsorship of Living Longer Better, an onl... 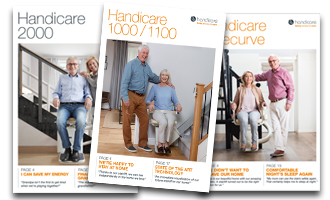