Staff at Handicare, based on the Pensnett Estate in Kingswinford, are putting their best feet forward to support a fundraising event organised by the British Healthcare Trades Association (BHTA) to help national charity SCOPE.

BHTA has a member section dedicated to Stairlifts and they decided that the best way to raise funds and awareness was to do 10,000 steps every day in September which over the month equates to 300,000 steps or nearly 150 miles. Handicare is just one of over 100 member companies involved. The total all participants will have covered by the end of the event is over 34 millions steps (which is over 17,000 miles).

Event organiser Sally Edgington from BHTA said: “The synergy between climbing steps and our stairlift companies that help people who can no longer climb steps, was a natural idea for our fundraising event. The monies raised for Scope will be presented at our annual awards dinner in London on 30 November.” 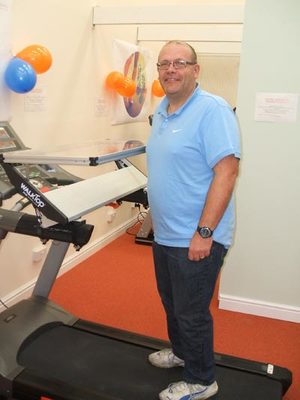 All of the Handicare volunteers taking part have a pedometer to keep track of the steps they have walked, and the company has installed a couple of treadmills to help them reach their daily target of 10,000 steps.

Managing director of Handicare, Clare Brophy said: “We thought this was a great idea for our company to get involved with a fun event that also raises money for a good cause. Steptember is certainly a challenge but we are happy to support BHTA and Scope.”

The organisation have also set up a fundraising page online if anyone wants to support the events. https://www.justgiving.com/fundraising/bhtasteptember

20 May 2022Handicare is Supporting the Live Longer Better Revolution!Handicare has agreed a two-year sponsorship of Living Longer Better, an online course to help older ...Read more
10 May 2022Tips for coping after a traumatic eventDealing with a traumatic event can have a huge impact on your life, no matter the severity. It can o ...Read more
06 May 2022Tips for helping special needs children change schools Starting a new school can be scary for a special needs child but in this guide, we offer advice for ...Read more